Mechanical Advantage FRC 6328 is open to student team members who are willing to work hard and commit to the team. We generally accept students ages 13-18 (grades 8-12) from any school/community in the area. We are a community-based team and not tied to a particular school or town.

Generally, we accept new students in May/June/July for the following competition season that starts in January. This is because we spend the summer and fall doing internal trainings, outreach, and team bonding activities that prepare the team for the intensity of the competition season. Exceptions can sometimes be made, however, so don’t hesitate to reach out! 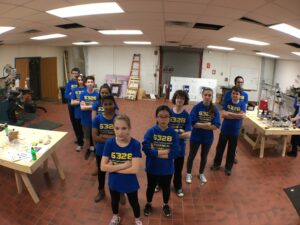 We have opportunities in:

The season starts the first weekend of January, when that year’s game and rules are released. The team then designs, machines, builds, programs, and tests a robot to compete in the game, and completes documentation and award applications, all of which is a huge task. Then, the team competes in 2-3 New England district weekend competitions (or, occasionally, 2 in New England and 1 slightly further afield) starting at the end of February/beginning of March. Based on the results of those competitions, the team can be invited to compete at the New England Championships in early April and the World Championships held in Detroit MI in late April. 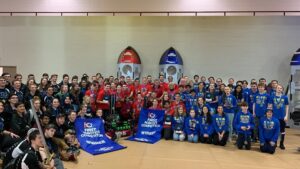 Through build and competition season, the team will generally have work hours five days/week, including some on weekends. Students are not expected to be at all work hours. The time commitment for an individual student will depend on what sub-team(s) the student is part of, their personal schedule and availability, and their leadership role on the team. And, as they will hear us say all the time, SCHOOL COMES FIRST!

“Teams are built in the off season!” While things do quiet down during the off season, the team is still working hard. This is the time we focus on outreach, fundraising, training, organizing, our FLL program, and everything else that needs to happen so we can hit the ground running in January. 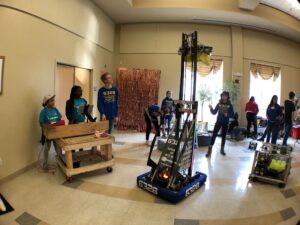