Whose Fault Is It?

Before Granite State, we checked for compliance with Rule 611 – the one that causes your Friendly Robot Inspector to ask for your voltmeter. To prove your frame is isolated from your electrical system, you turn the main breaker on and then measure the resistance from each of the power input terminals to the frame (at several points). Normally it’s very high and all is well. So we did our test, and we passed… barely. We were measuring approximately 3.5K Ω to both the 12V and ground connections. This is much lower than we’d expect to see, and just barely clears the specified minimum of 3K Ω.

A cursory inspection didn’t uncover any obvious faults and all subsystems were fully operational. Since we were passing, and time was short, we let it go. We did pass inspection, although the inspector commented on the low reading (but as our mechanical folks like to say – “clearance is clearance”). However, we were determined to track down the fault before the next event, as something was not right.

This fault can require some time-consuming effort to locate, so it’s best to check for it well before your events. I thought it might be instructive to go through the process and what we ultimately found, for those teams who might not have had to deal with this before.

FRC-legal electrical components are isolated – controllers, motors, etc. are not supposed to have any connection from their electrical terminals to their cases, mounting points, etc. But there are a number of ways that we can end up with a connection to the frame:

Let’s first envision a few different kinds of faults with the help of this extremely simplified schematic: 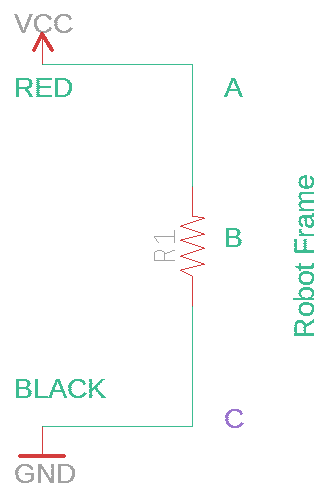 The input terminals are on the left, with the robot’s electrical system represented as a resistor R1. If we imagine the frame to the right, there are three possible points where we could have a connection:

Before we get too deep, it’s worth checking the obvious. Run a systems check – is everything working? Do a visual inspection, using a light to peer into dark areas. Look for loose wires, signs of abrasion, wires catching on mechanisms. Focus especially where wires attach to moving elements – intakes, pivots, etc. – or pass near moving parts.

Next, rule out custom circuits. Completely disconnect anything like vision cameras, LEDs, proximity sensors, etc. If that makes the problem go away, add them back one by one until you find the culprit, then figure out how it’s making contact.

Finally, we have to start isolating motor and pneumatics circuits. If you’ve got a short to the 12V input – A in the diagram above – you may be able to just pull breakers until you find the circuit with the issue, since disconnecting a breaker isolates the positive side. More likely, though, you’re going to need to disconnect both + and – on each circuit in turn, in order to fully isolate it and rule it out as the culprit. This might mean pulling wires from your PDP/PDH. Our motor controllers have PowerPoles on them (for ease of swapping in the event of a failure) so for most circuits it was a bit simpler – we could disconnect those pairs one by one. Of course, this approach left the “pigtail” with the PowerPole on it still connected to the power distribution, so we were assuming the fault wasn’t in that part. If there’s no significant change in reading when you disconnect a circuit, you can put it back and move on to the next.

In most cases there’s likely a single fault, but in the worst case you might have to consider the possibility of multiple faults.

And the culprit is…

After painstakingly working our way through each motor circuit without luck, we reached the very last one – our “hopper” motor controller… and instantly when it was disconnected, the reading jumped 1000x to over 3M Ω. So the fault was clearly on that circuit. Next we reconnected the controller and disconnected the motor… still good. So that isolated the fault to a Neo 550 motor mounted to an UltraPlanetary gear set. We replaced that assembly and all was now well.

We disassembled the faulty UltraPlanetary and discovered that if we loosened the M3x8mm bolts that held the plate onto the motor just slightly, the fault disappeared. These are the standard, recommended bolts, but somehow one was contacting an internal component (or coil) and causing our frame short. That motor also still works just fine, but is flagged and will never again go on a competition robot, as we don’t know what might be damaged.

If you’ve been through this and have other tips and tricks, please share in the comments!